Know When to Replace a Toilet: 10 Signs It’s Time 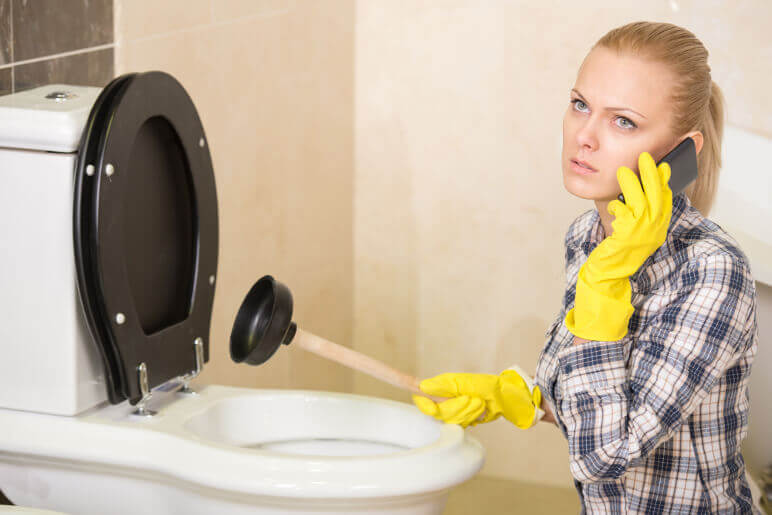 Toilets don’t usually make good table talk. They’re a sensitive subject for some people and if you talk about them at dinner, someone may kick you under the table. That’s too bad because we all have at least one amusing story about a toilet gone bad.

Not talking about toilets results in something worse than a swift kick to the shins.

You may miss out on advice about your own troublesome toilet. Without answers, you could end up spending a fortune in repairs. Or worse, you might ignore the problem and end up with a plumbing disaster.

Knowledge is everything, so we’ve put together a guide designed to help you know when to replace a toilet.

You’ll likely hear varying opinions on how long a toilet should last. We’ve heard 50, even 100 years. Keep in mind that’s the fixture itself, not the inner workings.

Also, know that even if your toilet is a little old, it may still do the job. Older toilets do often suffer from inefficiency. Replacement saves money and water.

Believe it or not, the federal government even has something to say about your toilet. According to the Energy Policy Act of 1992, toilets installed after 1994 must have a flush volume of 1.6 gallons per flush. Toilets manufactured before this policy went into effect used between 3.5 to 5 gallons.

The bottom line on aging toilets? If you know your toilet is at least 25 years old, consider replacing it.

Have you noticed water puddles near the base of the toilet? Unless you have a child who hasn’t learned the art of aiming, it’s possible you have a cracked tank.

You can start with your own inspection. Examine both the inside and outside of the tank.

The location of the crack determines whether a repair will suffice. If it’s below the water line, you may need a toilet tank replacement. At that point, most homeowners replace the entire toilet.

Tank cracks aren’t always visible, especially if you have a hairline crack. If you can’t find a visible crack, a plumber should come in and do a more thorough inspection.

Even though we just said cracks aren’t always visible to the human eye, cracks are easier to detect than leaks.

Toilet leaks may go undetected for several months. It’s not that you’re a negligent toilet owner, you simply don’t realize you have a leak. You likely won’t see water on the floor like you would if you had a cracked tank.

Since leaks are sometimes sneaky, how do you know you have one? Look at your water bill! Leaking toilets use an excessive amount of water. If your bill suddenly increases without any other explanation, check for a leak.

Damaged flooring and subflooring is an unfortunate result of a rogue toilet. Left to its own devices, a leaking toilet in an upstairs bathroom can cause water damage in the rooms downstairs.

If you have an older toilet and it’s leaking, replacing it is the most cost-effective move you can make.

One of the most annoying plumbing issues is the constantly running toilet. Of course, water flowing for a short time after you flush is completely normal. When water continues running from the tank to the bowl, that’s not a good sign.

While we don’t suggest replacing a toilet if this is the only problem, sometimes this fix doesn’t work. The toilet could have a broken fill valve in the tank (or another problem).

As you’ll see next, one way you can decide when to replace a toilet is when you find yourself repairing it every other weekend.

Most people don’t sit around drawing schematics of toilets. Therefore, unless you’re a plumber or a DIY fanatic, you likely don’t know much about the insides of the porcelain throne.

Toilets aren’t that complicated, but they do have several working parts including:

Whew! As you can see rebuilding a toilet can include quite a few items. Most toilets don’t need every part replaced at the same time. However, you should consider the cost of parts and your time.

If you’re spending even one weekend every month fixing a toilet, you should start hearing a small voice (it’s your conscience) telling you it’s time to change the toilet.

So far, we’ve only discussed the minor issues of age, cracks, leaks, and frequent repairs. Now we’ll get down to business and look at the serious signs of a toilet that needs replacing.

6. You Deal With Frequent Clogs

Most toilets clog occasionally. If you have children who get a kick out of flushing toys and other objects, yours may clog weekly. However, if you plunge every other day and it’s not due to preventable human activities, you have a toilet problem.

Be aware that older toilets may need more than one flush. They’re also susceptible to random clogs.

First, make sure the clog isn’t caused by a problem further down the pipeline. If your plumber determines that’s not the case, consider replacing the old toilet with a new fixture.

7. The No Flush Toilet

Unless you have a compost toilet (and we hope you don’t), there is no such thing as a no flush toilet. There is, however, the toilet that won’t flush.

You can’t plunge this one and you can’t jiggle the handle and make it work. The non-flushing commode means you have serious toilet trouble.

We know a broken toilet is a real inconvenience, especially if you only have one in the house. Many people make a non-flushing issue worse because they start poking around in the toilet with various objects.

Ruling out any other plumbing issues always comes first. But barring a problem in your plumbing system, when a toilet stops flushing, it’s a good sign you should replace it.

Now You Know When to Replace a Toilet

Hopefully, we’ve taken some of the mystery out of the most used fixture in your home—the toilet. Or at least we’ve helped you know when to replace a toilet.

It doesn’t matter if you’re dealing with an old fixture, a crack, a leak, multiple repairs, clogs, or a toilet that stops flushing. We’re here to help you figure out the best solution.

If you’re ready for a new toilet or need other plumbing services, contact us today and we’ll schedule a visit.